Dog leg left and uphill, with out of bounds to the right all along the hole.

Hit your first shot to the right of the bunker on the left to leave a second shot to the platform that starts around 130m out from the green.  This will leave an easy third shot to reach this green in regulation without problems 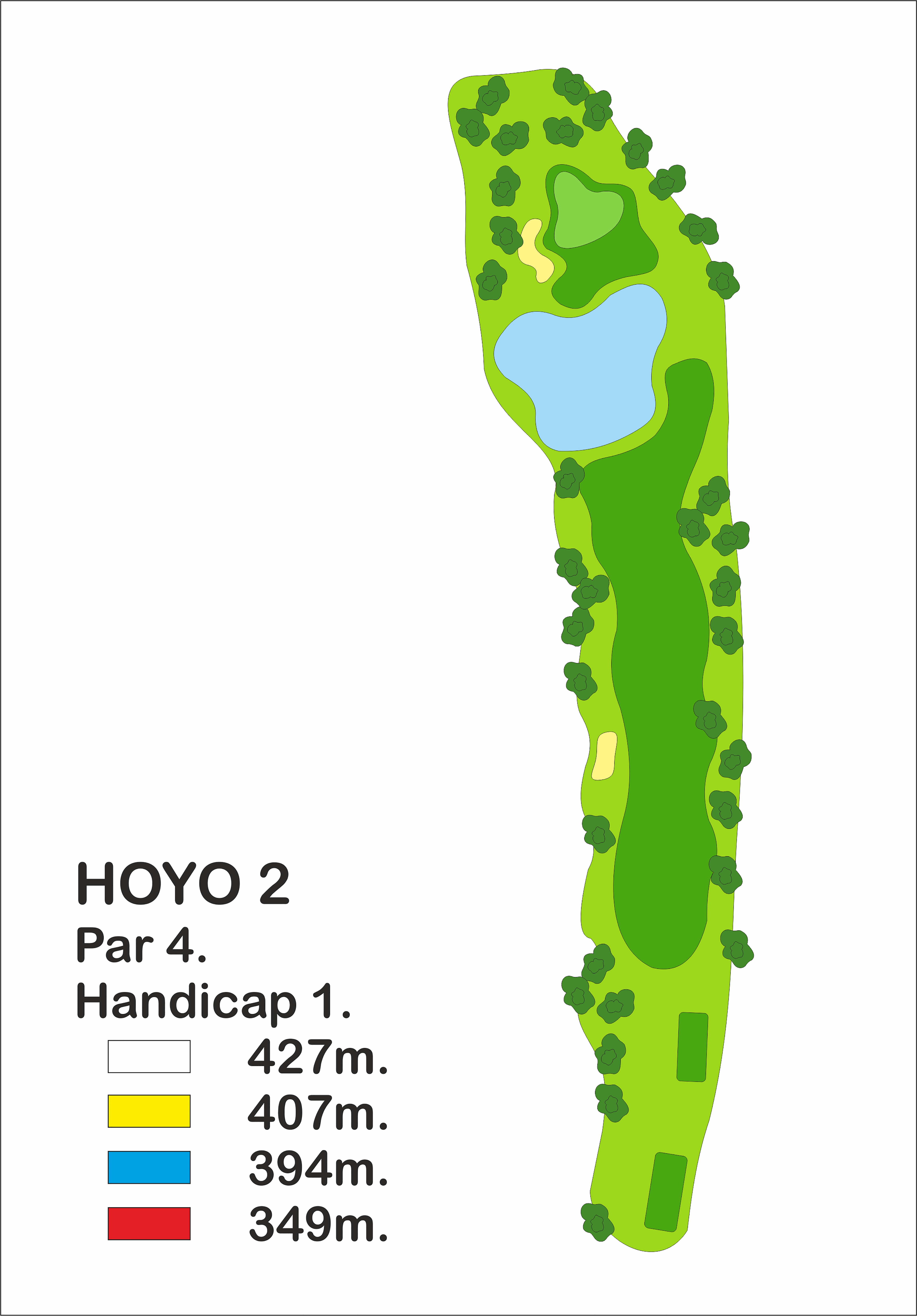 This long par 4 is straight, downhill, and then up again with out of bounds to the right all along the hole.

With the first shot, the small valley at 200 meters should be overcome in flight to allow the ball to roll to a good position. The prevailing northeast wind, and large water hazard make it difficult to reach this green in regulation.

The main thing in the first shot is to place the ball in the lowest part of the fairway, favoring the left side.  This will allow for a second shot to the top of the hill, giving easy access to the green with the possibility of choosing between its two platforms, well differentiated by a steep slope. 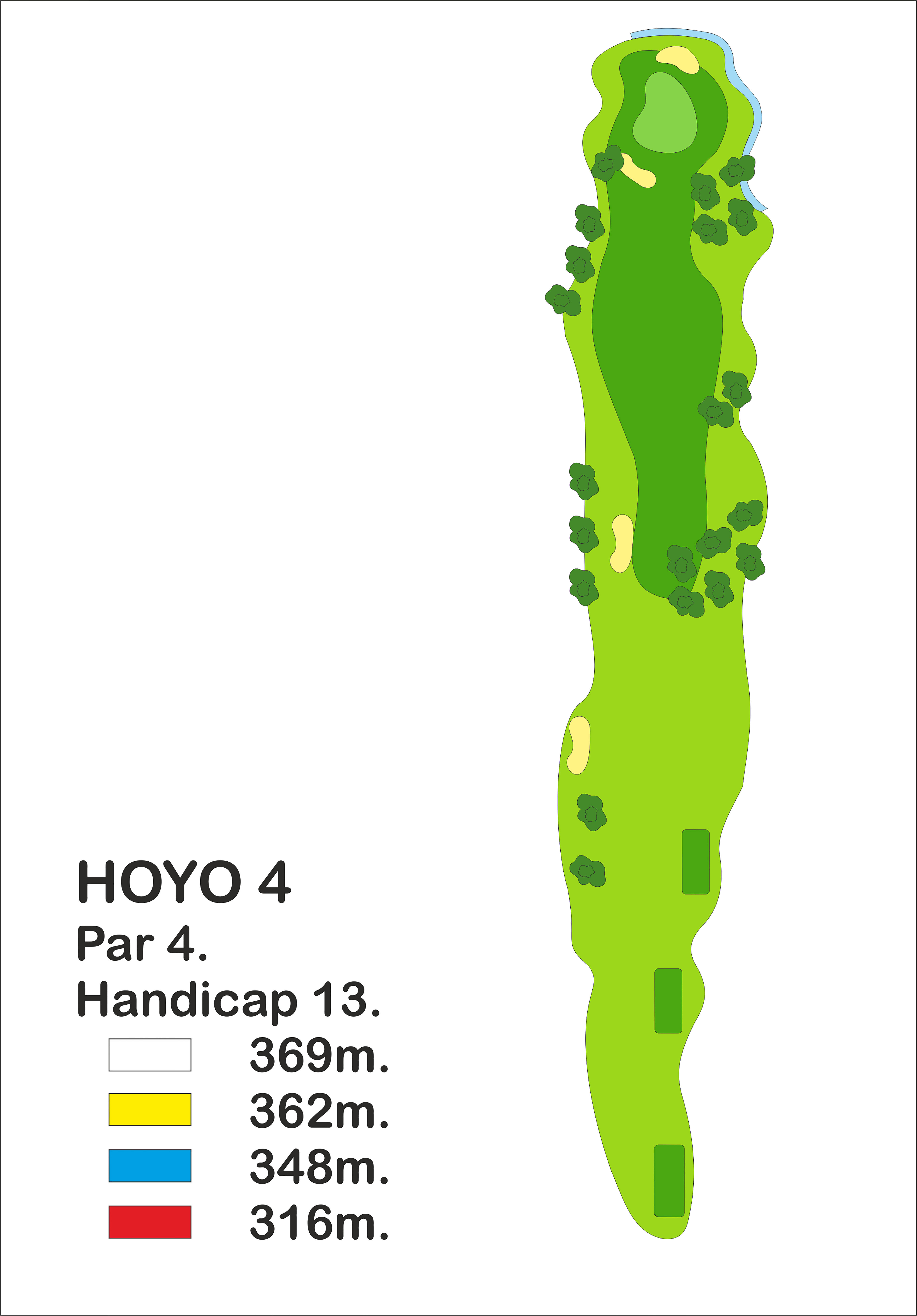 Straight, downhill par 4 with the predominant wind being favorable, and out of bounds to the right all along the hole.

The bunker to the left of the fairway largely determines the roll and the final position of the ball.

A good first shot will allow you to reach the platform 75 meters out,  where you can perfectly reach the green in two strokes. 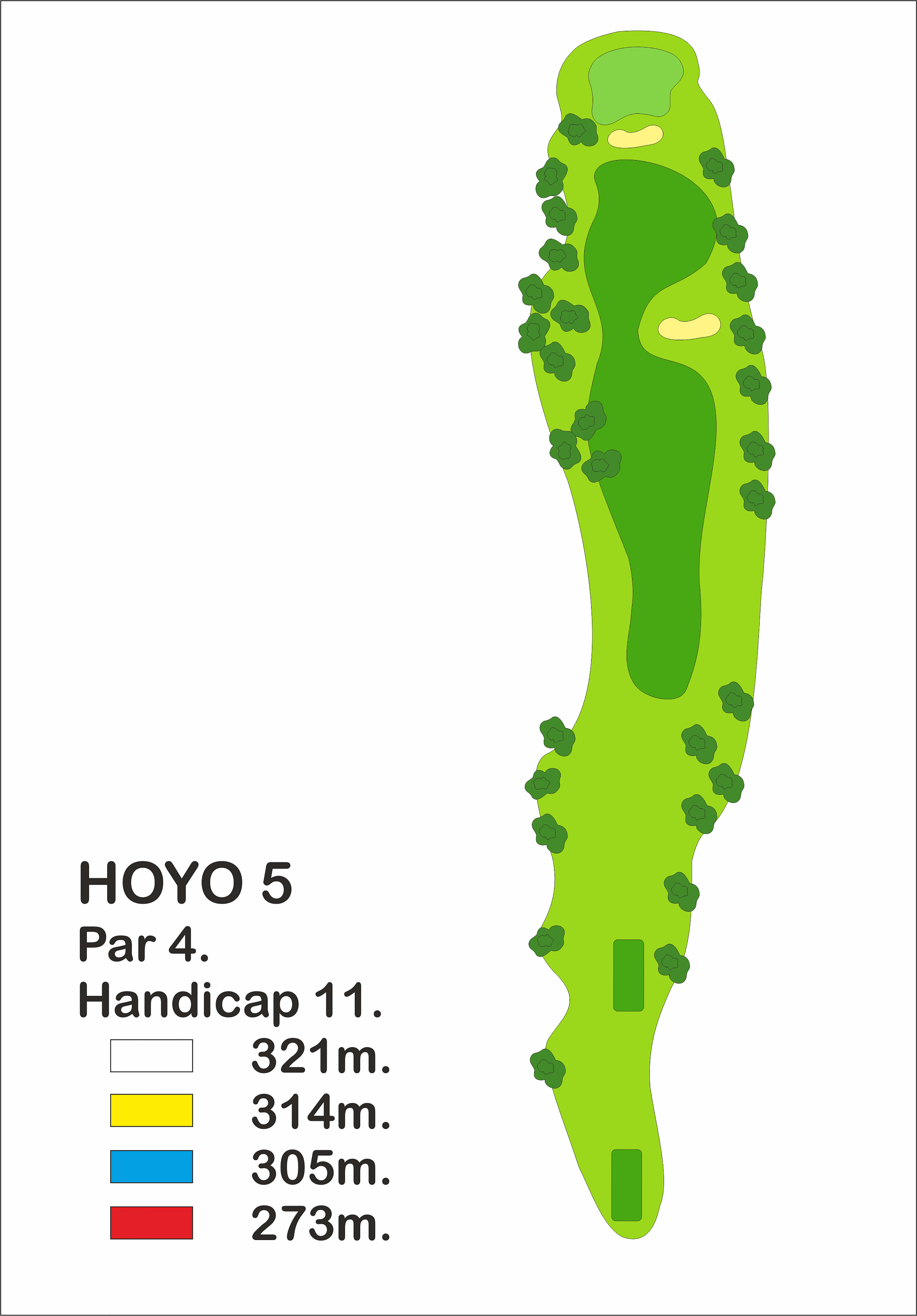 This par 4 is straight and uphill.  On your first shot you should try to pass  the three trees on the left, but not by too much, since the more you advance the more steep the fairway becomes, complicating the loft.

The green is fiercely protected by a large, deep bunker,  and the prevailing wind, which will force you to play at least two extra clubs, make this hole a challenge to complete in regulation.

The first shot should be played by aiming at the fairway bunker on the left, letting the slope of the fairway and the wind take it to the center. This will leave a high shot of approximately 100 meters down to a receptive green that runs uphill towards the back. 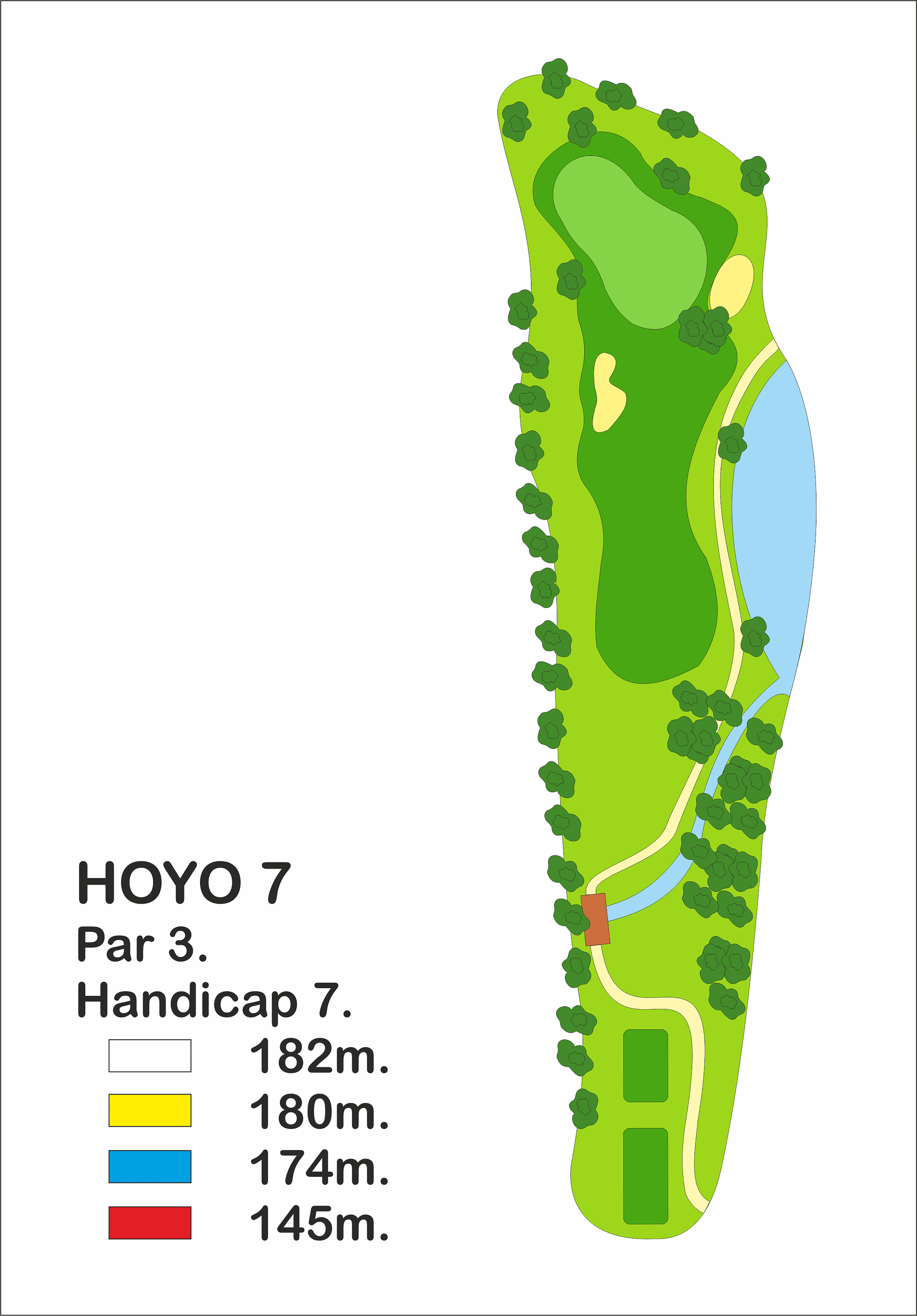 Although many miles from Augusta, this is the first hole of our particular “amen corner“.

A beautiful par three, this hole requires both distance and precision.  In addition to its 180m length,  it has an out of bounds on the left, a creek just past the tee box which leads to a large water hazard along the right, with a green protected by two bunkers.

Hole 8 is an average size par 4 that runs between a stream on the left, marked out of bounds and a lake on the right.  There are also two small creeks traversing the fairway.

Hitting a fade in the direction of, but avoiding the large bunker on the left will allow for an easy second shot to a figure eight shaped green, protected by an out of bounds to your left. 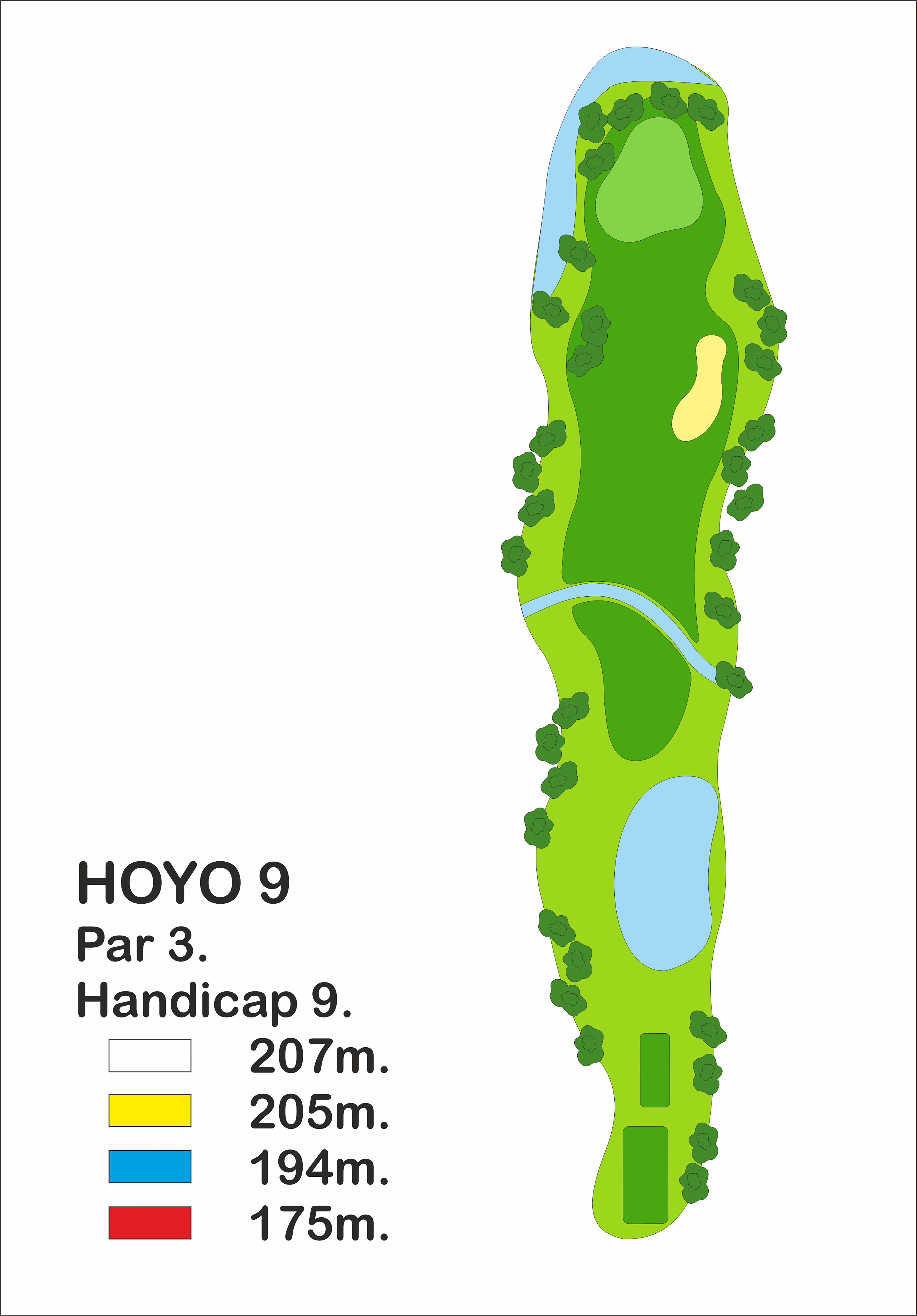 To close out this beautiful corner of the front nine, this impressive 205 meter par three will require a powerful shot towards the left side of the fairway.  If you get the distance right, the prevailing wind will help put you in the center of the green,  and if you are a bit short, a bounce on the left side will help keep you out of the fairway bunker on the right.

This beautiful par 5 starts from an island tee box, and is straight with a gentle slope up to 150 meters out from the green, where a steep descent slightly to the right will show a different view of the hole

A long drive isn´t necessary.  It is best to find the center or left part of the fairway, leaving a second shot that, rolling downhill, places the ball past the 100 meter marker on the left, leaving a clear shot to the green.

Straight,  steeply uphill, and protected with four side bunkers and a large central bunker that protects the green in three quarters of its perimeter.

A straight first shot that leaves you within 100 meters will give you a complete view of the green.

The second shot from there, due to its uphill position and the prevailing wind will require one or two more clubs than usual for that distance

This straight, uphill par 4, hides a fairway bunker on the left side which is invisible from the tee.

You should play to the right side of the fairway, allowing the slope to bring the ball rolling back to the center of the fairway.

The second shot has to be powerful due to the elevation of the green which is protected by a frontal bunker and the prevailing wind. If you cannot reach it in the air, a bump and run past the right side of the bunker is another possible option.

The 560 meters of this long par five will put even the longest of hitters to the test, it’s best to hit your drive to the right side of the fairway.  Next, if you are able, leave your second shot within 150 meters, and you will have a view downhill to the large green, well below your feet that is also protected by bunkers, fore and aft. 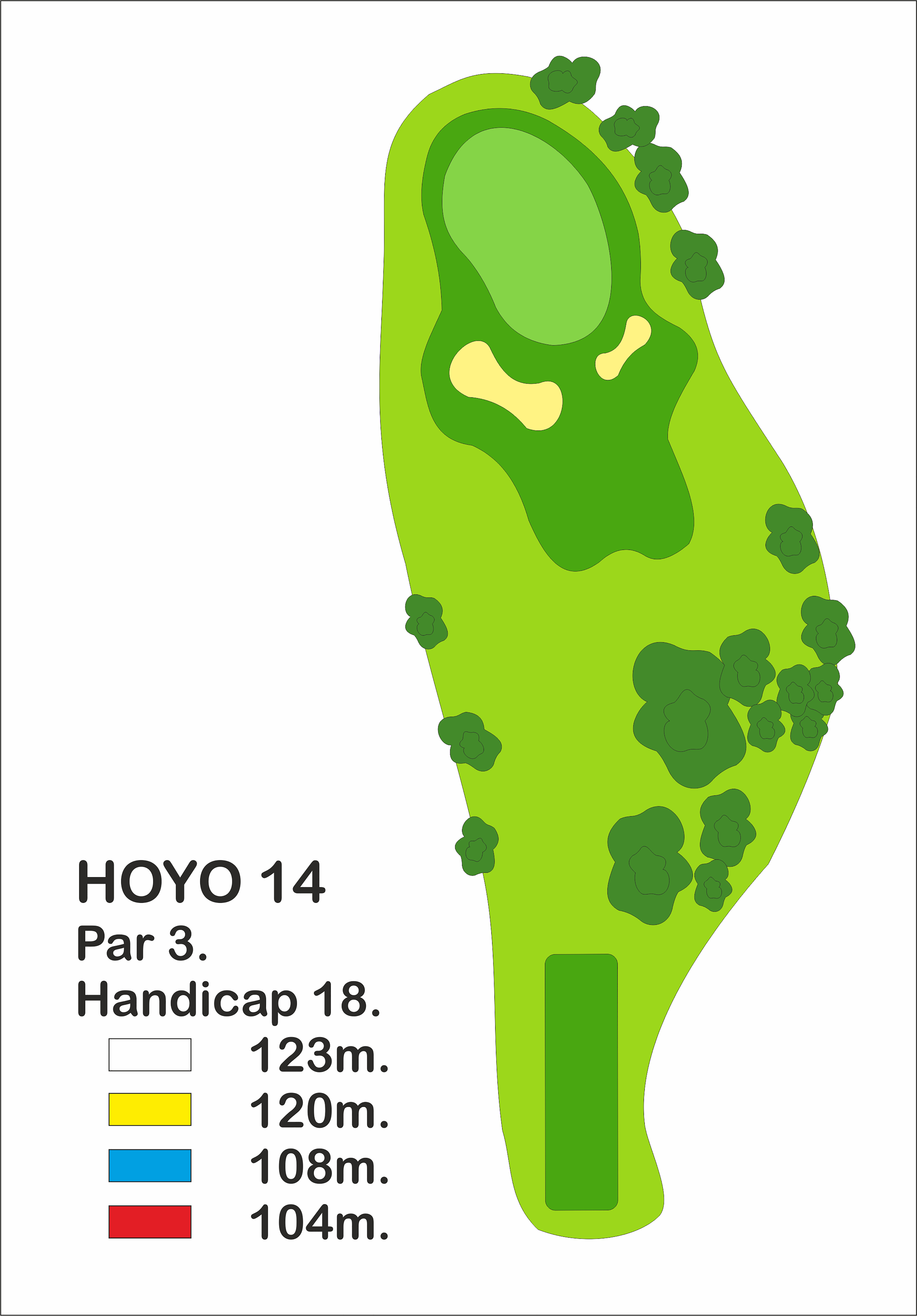 Do not belittle this short little par three for having the highest handicap of all.  Although in principle it does not pose great difficulties, sometimes things get complicated and one does not always get away with a par. 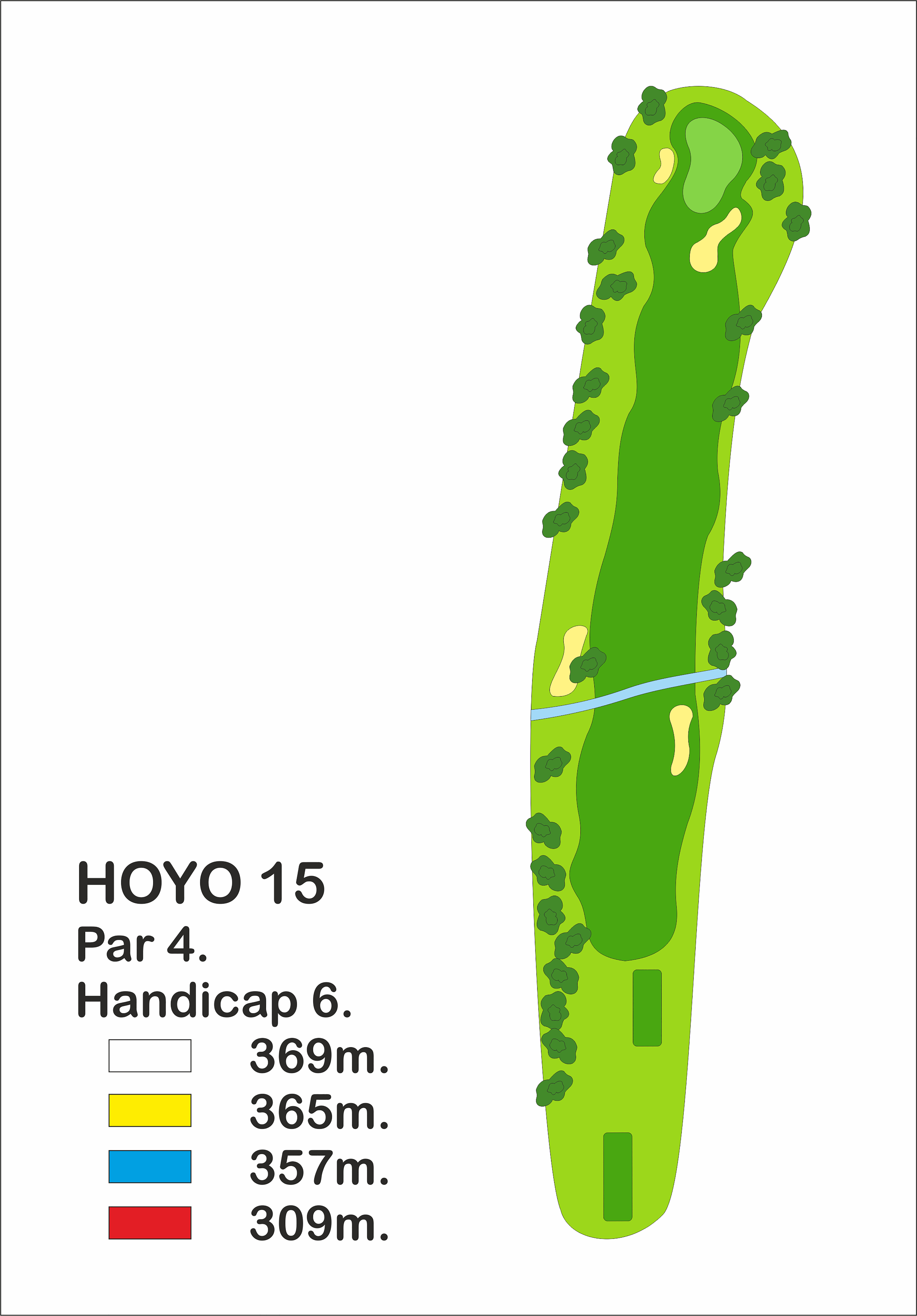 Traversed by a small creek, this par 4 starts straight and flat ending with a a steep uphill slope to the green.

There is out of bounds to the right all along the hole, which together with the prevailing wind invites you to aim to the left side of the fairway, where a bunker shared with the 13th hole looms.

After a well placed drive, there is still a difficult second shot to an elevated green.  Beware of the large, deep bunker on the right front, which has swallowed more than its fair share of golf balls.

The green has two tiers, separated by a steep slope, rounding out a hole whose difficulty makes the signing of a bogie nothing to be ashamed of.

After a long walk up from hole 15 we find ourselves on the tee of hole 16 where a beautiful view of the surrounding valleys will captivate you.  But do not be distracted, because although this downhill hole, with out of bounds on the left, is not one of the most difficult,  you will still need an accurate shot to avoid the tree in the center of the fairway, looking to leave yourself around 80-70 meters from the green.

For the approach to green you will usually need one club less than usual, due to the prevailing wind and out of bounds behind the green.

This simple yet picturesque 127 meter par three, being high and exposed to the wind, can leave you guessing as to which club to use. Depending on the direction and intensity of the wind there can be a difference of four clubs from one day to the next.

A frontal bunker and a deep rear bunker, many meters below the putting surface, defend this green which  has less break than is apparent at first sight.

Possibly the most emblematic hole of the golf course, hole 18 has destroyed many a potentially winning score card.  The difficulty here should not be underestimated.  Pay special attention to the placement of hazards, and obstacles on this narrow par 4 when shaping both your drive, and approach shots.

There is an out of bounds on the left from beginning to end, with four fairway bunkers, a lake at 100 meters out on the left, and another on the right of the green.  If you´re not careful, the predominant wind will take the ball to the right on the first shot,  and will stop it short on your shot to the green.

Once on, you will find a very undulating green with two lateral platforms that will put your best putting abilities to the test.